Title: Towards a standardization of the Physican Global Assessment (PGA) in Lupus?

Because of SLE complexity, the assessment of disease activity is particularly challenging. The judgment of whether a patient with SLE has active disease is a central question, both in routine patient management as well as in clinical research and the development of a comprehensive index for assessing disease activity still represents one of the most important challenges in SLE. A previous systematic literature review (Chessa et al. Rheumatology 2020) has shown that the Physician Global Assessment (PGA) of disease activity, is a valid, responsive, and feasible instrument. However, its reliability was strongly affected by the scale design. The Physician Global Assessment International Standardisation COnsensus in Systemic Lupus Erythematosus (PISCOS) study aimed to obtain an evidence-based and expert-based consensus standardisation of the PGA scoring of disease activity in SLE. An international panel of 79 SLE experts led by the University of Strasbourg (France) and Cagliari (Italy), participated in a three-round Delphi consensus process, in which 41 statements related to the PGA in SLE were rated, using a 0 (strongly disagree) to 10 (strongly agree) numerical rating scale. Statements with agreement of 75% or greater were selected and further validated by the expert panel. Consensus was reached on 27 statements, grouped in 14 recommendations, for the use of the PGA in SLE, design of the PGA scale, practical considerations for PGA scoring, and the relationship between PGA values and levels of disease activity. Among these recommendations, the expert panel agreed that the PGA should consist of a 0–3 visual analogue scale for measuring disease activity in patients with SLE in the preceding month. The PGA is intended to rate the overall disease activity, taking into account the severity of active manifestations and clinical laboratory results, but excluding organ damage, serology, and subjective findings unrelated to disease activity. The PGA scale ranges from “no disease activity” (0) to the “most severe disease activity” (3) and incorporates the values 1 and 2 as inner markers to categorize disease activity as mild (≥0·5 to 1), moderate (>1 and ≤2) and severe (>2 to 3). The PISCOS study constitute a very important research work which results allow for increased homogeneity and reliability of PGA ratings in routine clinical practice, definitions of remission and low disease activity, as well as in SLE trials.

Amongst the most significant challenges in SLE are the excessive diagnosis delay and the lack of coordinated care.

Among the most significant unmet needs in SLE are the excessive diagnosis delay and the common lack of coordinated care for SLE patients. The general concept behind that of patient pathways is that the healthcare systems should ensure faster diagnosis and, for patients diagnosed with SLE, result in a rapid initiation of treatment through streamlined, standardized strategies. In the context of SLE, early diagnosis is both a priority and a challenge, as prolonged diagnostic delay may lead to worse outcomes, including damage accrual and socio-professional issues. Several attempts to optimize the care of patients with SLE have resulted in the implementation of several national and international guidelines, but individual patient trajectories within healthcare systems remain largely suboptimal. Both diagnosed and undiagnosed patients with SLE typically present complex problems, often requiring multiple interventions provided concurrently from several partners in their care. This emphasizes the need for an integrated and holistic approach to SLE diagnosis and treatment. The aim of the study was to investigate patient pathways in SLE in order to improve clinical and organisational challenges in the management of those with suspected and confirmed SLE. The authors conducted a cross-sectional study of patients with SLE, healthcare providers and other representative stakeholders. Focus groups were conducted, and based on collected data the most impactful disruption points in SLE patient pathways were identified. A novel framework to improve individual patient pathways in SLE was developed, discussed and validated during a consensus meeting with representative stakeholders. In total, 6 thematic clusters regarding disruptions in SLE patient pathways were identified in this study: 1) the need for appropriate and timely referral strategy for SLE diagnosis; 2) the need for a dedicated consultation during which the diagnosis of SLE would be announced, and following which clarifications and psychological support offered; 3) individualized and coordinated care based on organ involvement, disease severity and patient preference; 4) improved therapeutic patient education; 5) prevention of complications such as infections, osteoporosis and cancer; and 6) additional psychosocial patient support. 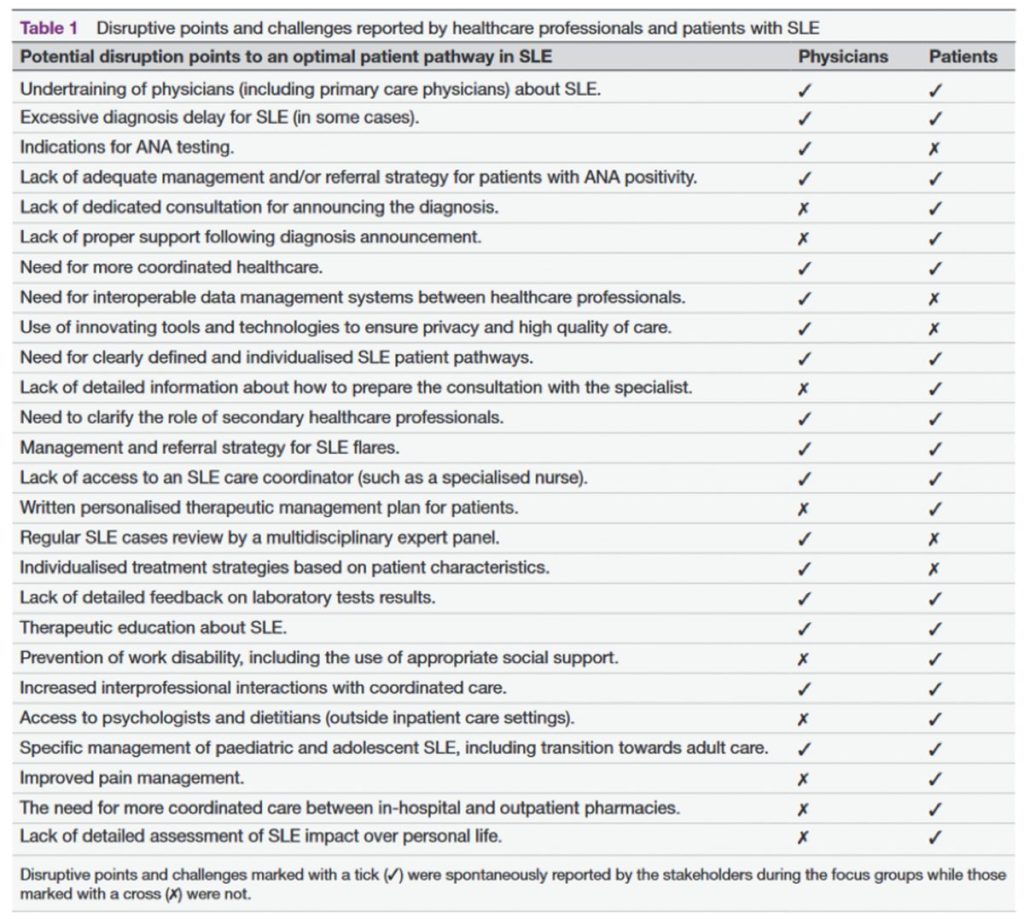 During the consensus meeting, the broader panel of stakeholders achieved consensus on these attributes and a framework for optimizing SLE patient pathways was developed. In total, significant disruption points in lupus patient pathways were identified. These data are of great interest to patients with SLE, their physicians, health organizations as well as policy makers.

We use cookies on our website to give you the most relevant experience by remembering your preferences and repeat visits. By clicking “Accept All”, you consent to the use of ALL the cookies. However, you may visit "Cookie Settings" to provide a controlled consent.
Cookie SettingsAccept AllReject All
Manage consent

This website uses cookies to improve your experience while you navigate through the website. Out of these, the cookies that are categorized as necessary are stored on your browser as they are essential for the working of basic functionalities of the website. We also use third-party cookies that help us analyze and understand how you use this website. These cookies will be stored in your browser only with your consent. You also have the option to opt-out of these cookies. But opting out of some of these cookies may affect your browsing experience.
Necessary Always Enabled
Necessary cookies are absolutely essential for the website to function properly. These cookies ensure basic functionalities and security features of the website, anonymously.
Functional
Functional cookies help to perform certain functionalities like sharing the content of the website on social media platforms, collect feedbacks, and other third-party features.
Performance
Performance cookies are used to understand and analyze the key performance indexes of the website which helps in delivering a better user experience for the visitors.
Analytics
Analytical cookies are used to understand how visitors interact with the website. These cookies help provide information on metrics the number of visitors, bounce rate, traffic source, etc.
Advertisement
Advertisement cookies are used to provide visitors with relevant ads and marketing campaigns. These cookies track visitors across websites and collect information to provide customized ads.
Others
Other uncategorized cookies are those that are being analyzed and have not been classified into a category as yet.
SAVE & ACCEPT
Powered by